It’s done. After months of working on migrating stevenschwenke.de to a completely new setup, I can finally announce the website to be online. In this article, I want to highlight the changes and my motivations behind them.

To understand why I completely rebuild the page, let’s have a look at the past.

My very first personal website was a static HTML page, which I created manually. It only consisted of very simple HTML so that I could write it by hand. If I remember correctly, there wasn’t even any CSS involved. It looked fantastic! :D

When I began working as a professional software developer, I created a page using the content management system Drupal. Compared to the previous page, it looked tremendously better because of the freely available themes of the Drupal community. The many plugins also offered a ton of features. I set up a workflow for reviewing articles and used plugins for editors, syntax highlighting and the integration of social platforms. That worked very well for years, I even did a major facelift and improved the page continuously.

However, the costs of the nice visuals and the relatively easy editing stacked up. Drupal publishes a lot of security updates which have to be installed as soon as possible. Even without publishing anything, I spent hours just to keep the page running. Also, I had to create manual backups of both the database and the asset-files after each upgrade and test everything again and again. The major version changes even tended to screw up parts of my page, so I ended up with one of the long-term support (LTS) versions which held me back from using the most recent features. In essence, I had to invest time without getting more features in return. Also, the page itself was tremendously complex, considered that I only used it as a simple blog. The worst part was Heartbleed, which forced me to rebuild the whole page from scratch because I couldn’t be sure that it wasn’t compromised. This, of course, took a ton of my time and again, brought no benefit for me or the visitors of my page.

With the most recent version introduced in this article, I hope to lower the complexity, increase the stability and focus on the blogging aspect of the page. I decided to again use static HTML, only this time Jekyll will generate it. Static HTML pages don’t need security fixes, they load much faster and maybe even provide a better Google rank. Also, everything is “as code” by default, which makes version control a breeze. And there is no database that has to be maintained!

In summary, I want to simplify the technical setup of my website and focus on writing articles.

The new page will not support comments because of two reasons. First, user-generated content such as comments would complicate handling of GDPR because I would have to offer a way for my visitors to request information about their stored data as well as options to remove them. This is technically possible, but it would be one more potential distraction from more important things. The second and more technical reason is that static HTML pages in general don’t have user-generated content because they don’t have a database. To store comments, I would have to create and manage such a database or buy a service from a third-party company, which would complicate GDPR handling even more.

I am aware of a blog not really being a blog without the possibility to get in contact with the author via comments. This is a tradeoff between maintainability from my side and user-friendliness on the side of you, the reader. If you want to get in contact with me, there are several ways mentioned prominently on the front page such as Twitter or simple mail.

Some time ago, I bought the domain https://passionatesoftwarecraftsmanship.com that forwards to https://stevenschwenke.de. The slogan “Passionate Software Craftsmanship” describes best how I see my vocation, and I began using it in virtual backgrounds, as an email signature and as a guideline for my actions as a software developer. I am not sure yet if I want to build a “real business” around the slogan, but it’s good to have a domain at the ready.

With the release of this page, I begin offering a newsletter. You can subscribe to it in the page’s footer. I will use this mailing list as another way to promote my postings on this page and inform about other projects I’m involved in. 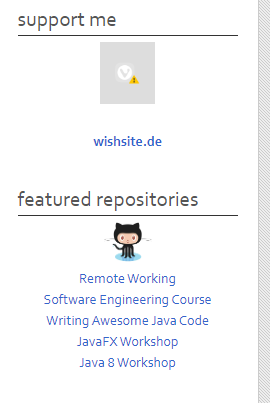 Many years ago, a platform called Flattr tried to offer an option to monetary thank a content-contributor by handing him some money with only one click. While the base idea is great, this never worked out for me, so I removed this feature from the page.

Near the same spot in the side menu as Flattr, the list of featured repositories will disappear as well. I plan on highlighting some content, like repositories or projects later on, but this has low priority on my bucket list.

Life is fluid and situations change. I used the overhaul of the page to remove some sections that kind of fell out of time. 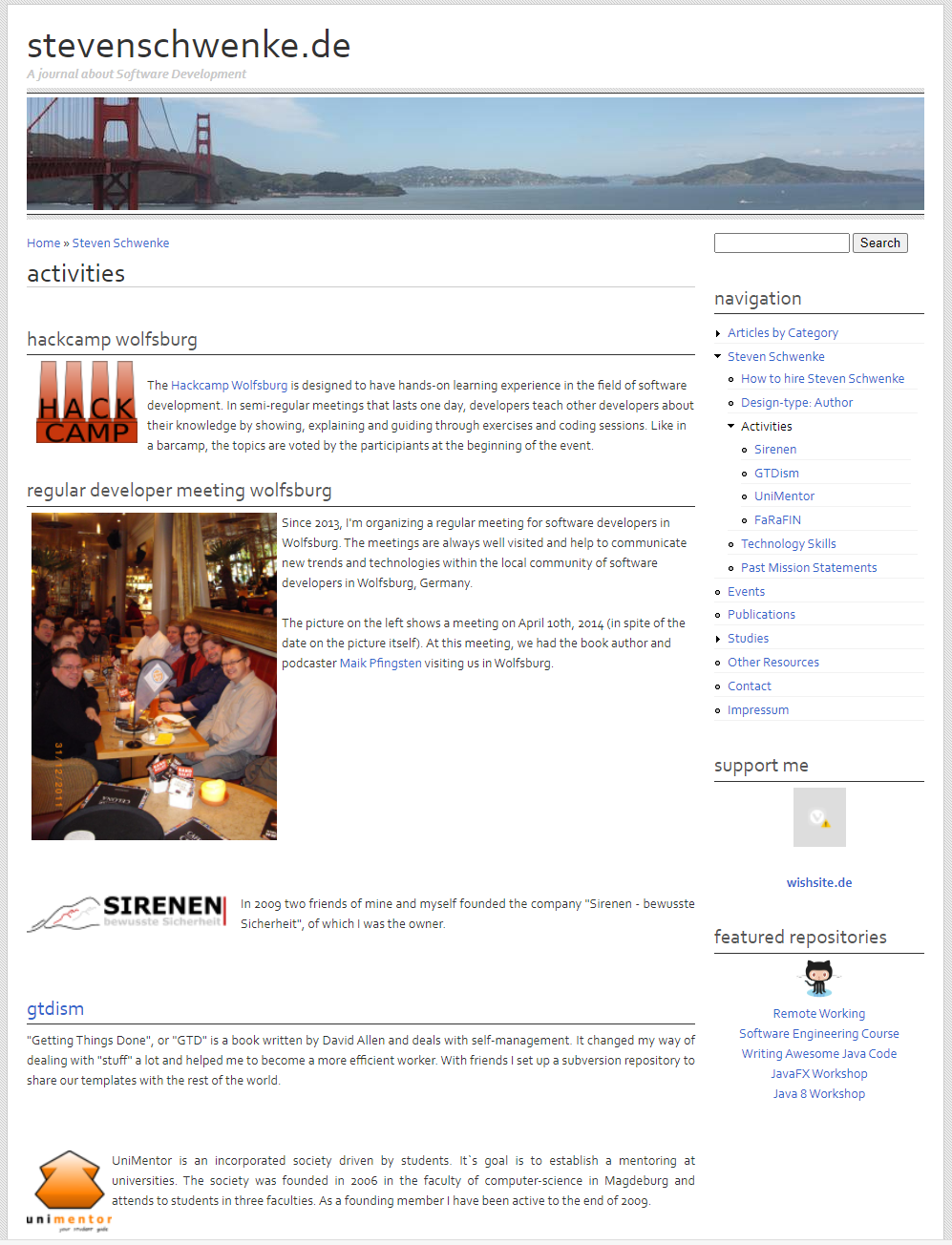 One of those sections summarized my activities. The old page provided a static page that showed, for example, a very superficial insight in the HackTalk. I never updated this aspect, so it got stale quickly. 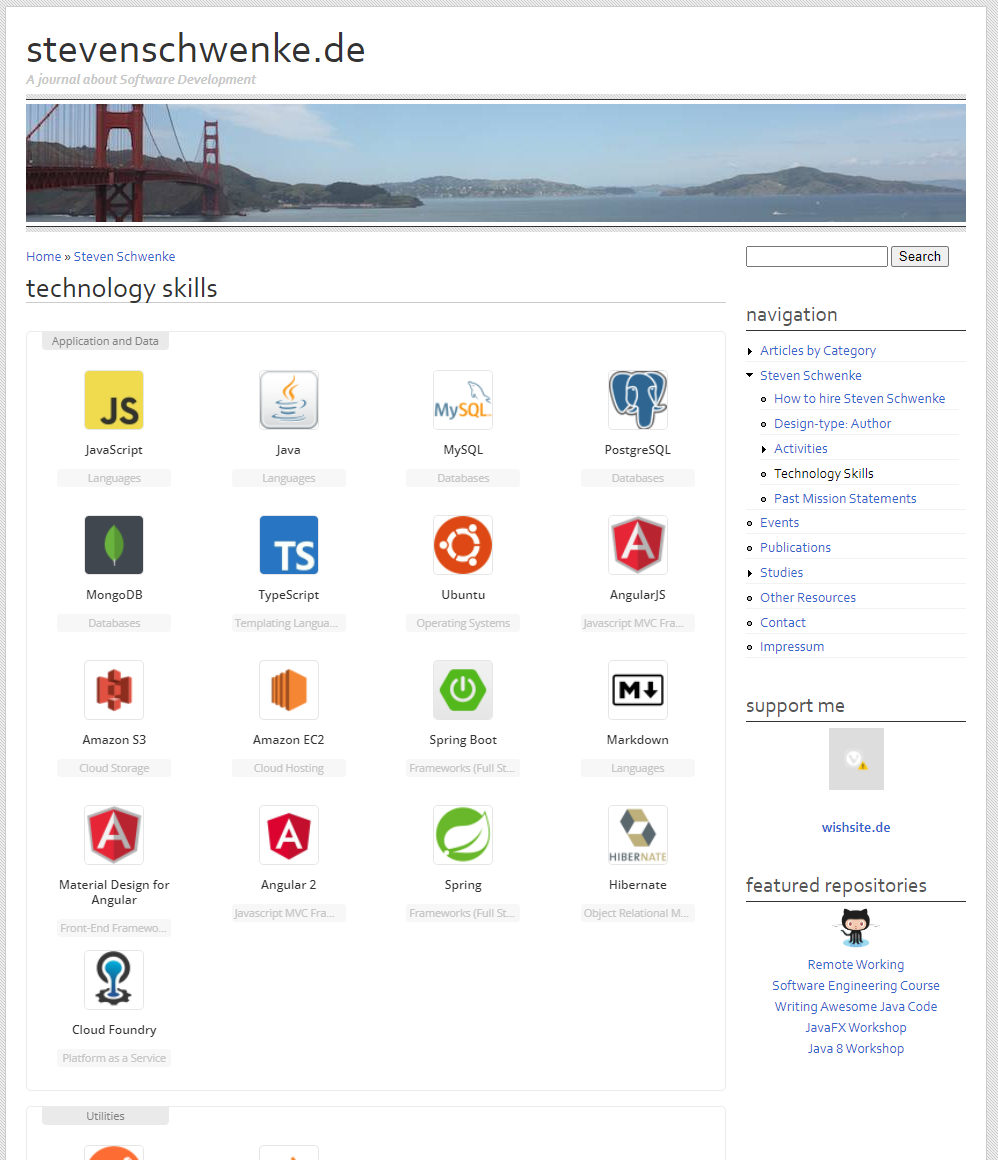 Another static page I rarely updated was the technology overview. This was basically an image of the skills that I entered in Stackshare. This too got updates rarely, so it got removed. Maybe I’ll continue using Stackshare in the future. 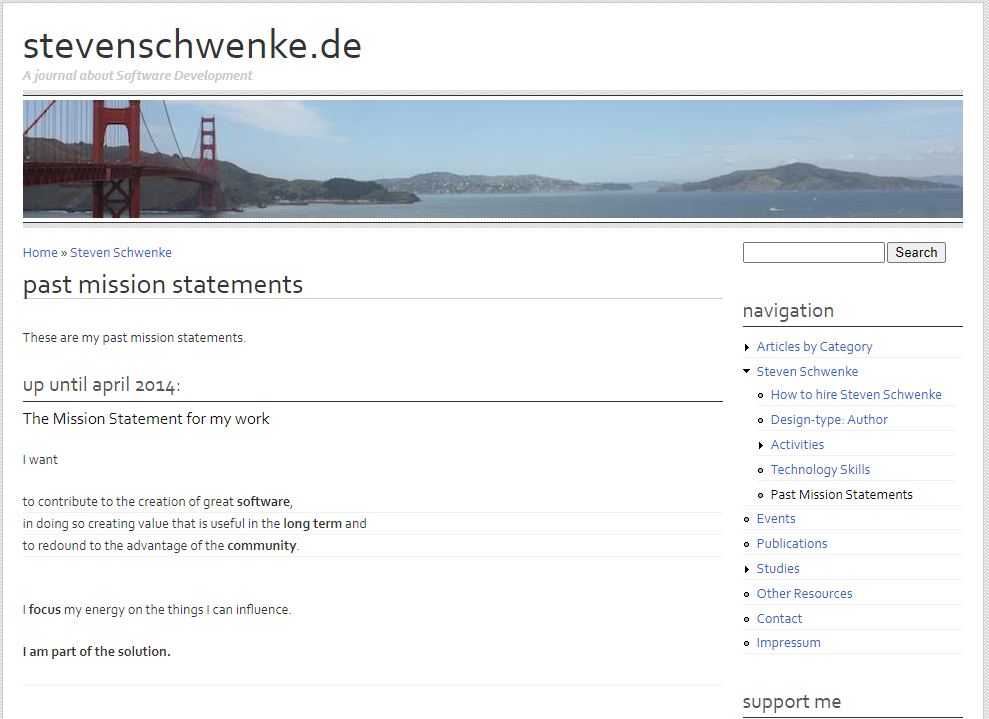 Without further explanation, here are some of the features on my bucket list that may appear in the future:

With one tear-filled eye and one eye that is looking happily into the future, I bid farewell to my old digital home … 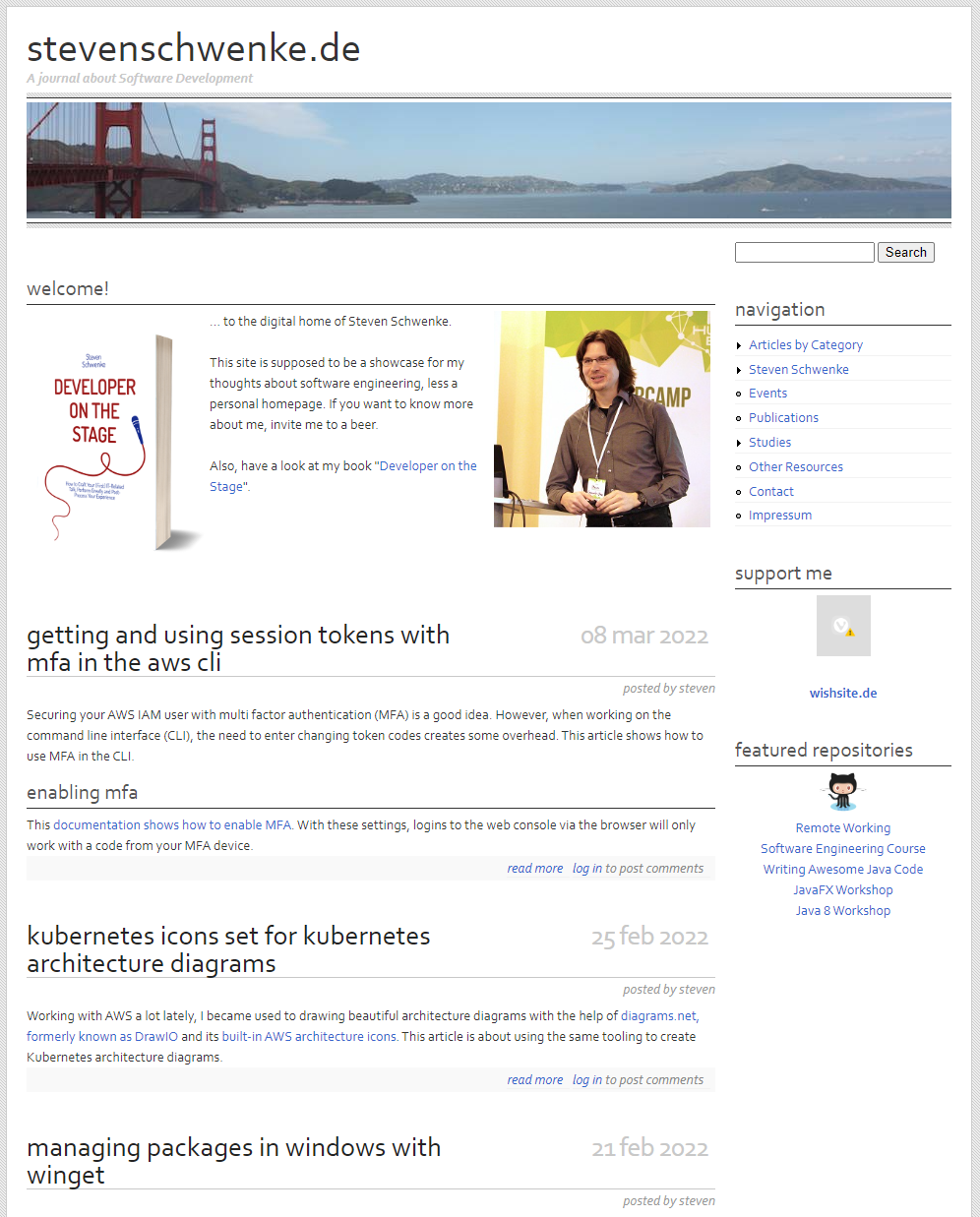 … and welcome my new homepage: 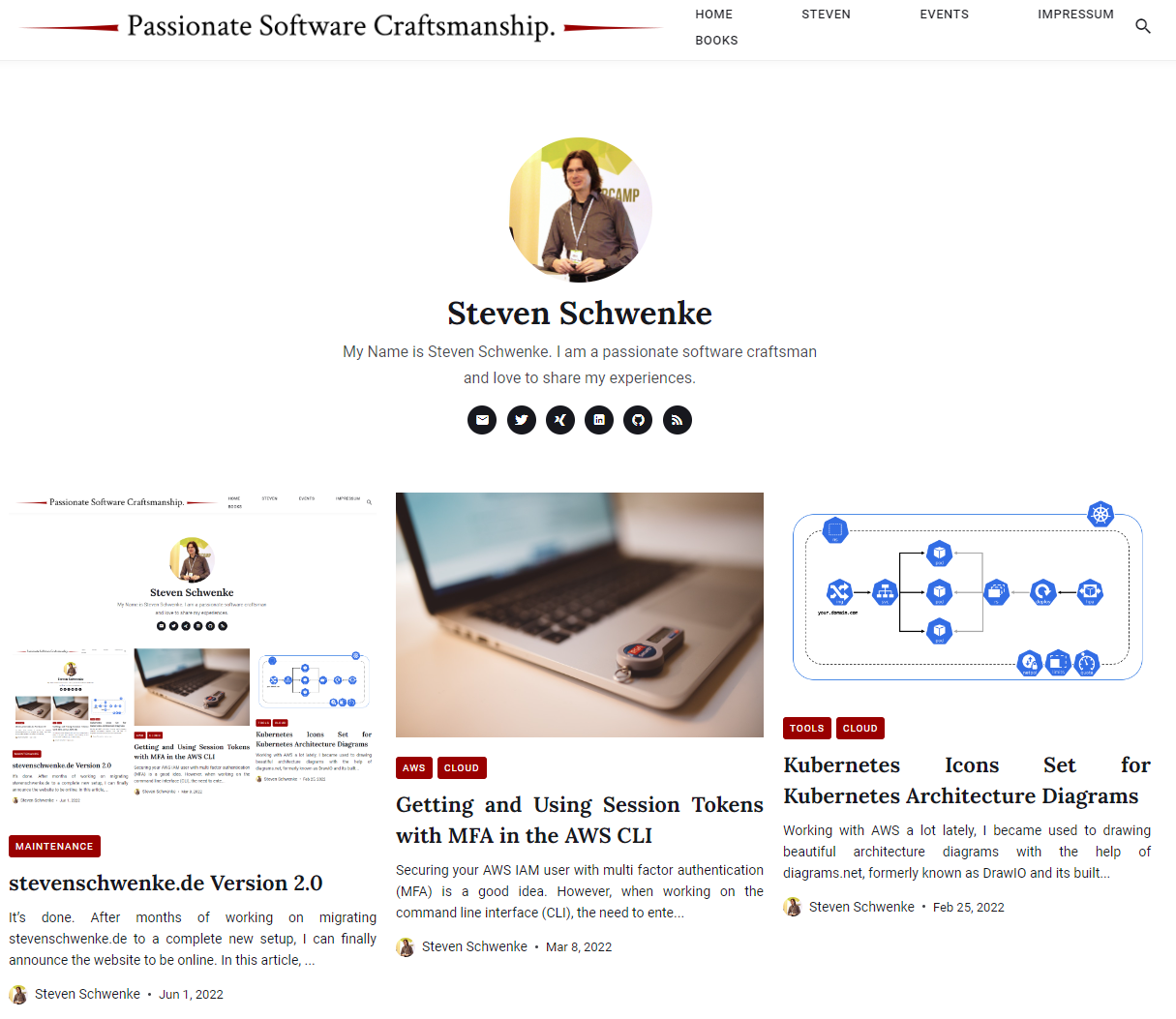 Getting and Using Session Tokens with MFA in the AWS CLI

Lessons Learned and News in December 2022

Lessons Learned and News in October and November 2022